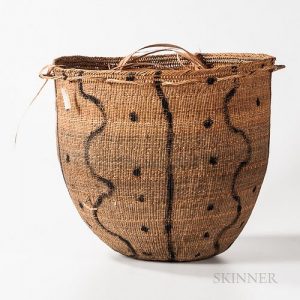 Christopher Columbus, an Italian explorer, set foot on the American continents during the 14th century. Before his arrival, however, Indigenous peoples had permanent settlements, cities, agriculture, architecture, earthworks, and complex societies. Native Americans have adapted to the new world but continue to practice their traditions and speak in their own languages. Over 600 lots from Native American cultures, both pre-Columbian and contemporary, will be available in the upcoming Tribal Art Auction, presented by Skinner. A pre-Columbian 22-karat gold double eagle pendant is among the key lots. Also available from the pre-Columbian era is a fringed and beaded dress made of hide. A blue glass beaded yoke decorates the top half, up to the sleeves. Buffalo nickels also adorn the yoke below the neck opening.

A “peace-pipe” widely known as a Plains pipe is featured as well. The Plains pipe was ceremonially used by Native Americans to bind a peace treaty. Other lots include pottery decorated with serpents and jaguars, as well as Navajo weavings and Eskimo human figures. To view and bid, visit Bidsquare.