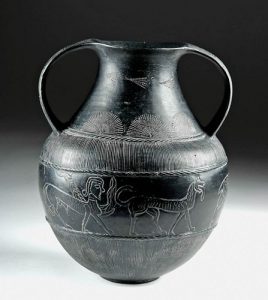 Under a powerful spell, Hercules killed his wife and children. Upon realizing, he was filled with guilt and went to the Oracle at Delphi and asked for her help. The oracle commanded Hercules to visit and serve his cousin, King Eurystheus, who would give him 12 tasks that Hercules must successfully complete to be forgiven.  Upon reaching, Eurystheus tasked Heracles to kill a lion that was the cause of suffering in Nemea’s land. The lion would roam the hills of Nemea, killing people and their livestock. When Hercules found the lion, he tried to kill it with his bows, which proved useless. Then, Hercules clutched the lion in his muscular arms and strangled it, finally choking it to death. A bronze figure depicting Hercules wearing a hood and cloak made from the Nemean lion is the highlight of the upcoming event, presented by Artemis Gallery.

Another highlight of this auction is a black Etruscan Bucchero amphora. Bucchero wares are a shiny dark grey to black pottery produced by central Italy’s Etruscans from the 7th to 4th century BC. Also available is a Native American war shield. Made from buffalo hide, the shield is decorated with turquoise, vermilion, black, lavender circles, and snake-like figures. View the full catalog at Bidsquare.