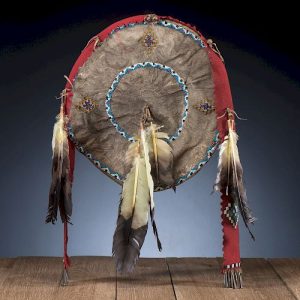 Tomahawks were an essential tool for many Native Americans, first for hunting and chopping, and then for defense. But both American and British officials would later use tomahawks as peace offerings for Native American tribal leaders. An example of a gifted, or presentation-style, tomahawk is available in the upcoming American Indian and Western Art auction presented by Cowan’s. The tomahawk’s steel head has several interesting embellishments, including a coin-silver heart with the initials “AM” inside it. Each of the auction’s 314 lots, like this tomahawk, are reminders of the daily life of Native Americans across North America.

Beyond weaponry, another lot with a high estimated value is a Sioux beaded hide shirt. The shirt, which dates back to the late 19th century, is decorated across the shoulder straps and bib in amber and dark blue. Sioux refers to a group of seven Native American tribes who are a part of the Great Sioux Nation. Their land stretched across modern-day North and South Dakota.

Those looking for a more personal and also more affordable look into the lives of Sioux people should consider a photograph of a Sioux woman by J.R. McIntire. Little is known about McIntire, but what is clear is that the picture’s subject is wearing traditional tribal clothes. This includes a fully-beaded cape and a fringe skirt. Register to bid online on Bidsquare.