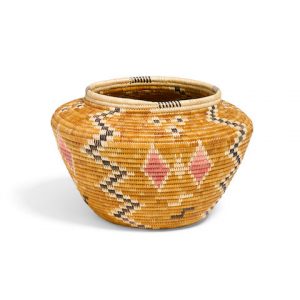 Traditional rattles are mostly associated with the shamans of the Tlingit Native American tribe. The Tlingit, whose name means “People of the Tides,” are indigenous to the Pacific Northwest Coast of North America. Featured in the upcoming Native American Art auction, presented by Bonhams, is a Tlingit rattle carved in the form of an oystercatcher. The bird has inset shell eyes and a human form on its back pulling at the bird’s horns. On the side of the bird, “1788” is inscribed in white pigment.

Also included is a Kiowa beaded cradle. The Kiowa tribe is native to the Great Plains but migrated to the Southern Plains by the early 19th century. The cradle highlighted in the auction consists of a fully beaded hood with leaf-form motifs on a blue background. It is mounted on a plain wood frame. The piece measures 45 inches in length and 12.75 inches wide. The style of the cradle has been attributed to Tahdo Ahtone. Other items found in the catalog include a Sioux beaded men’s shirt, a large Navajo crystal rug, and a Hopi Katsina doll, among others. View the whole collection and place a bid at Bonhams.