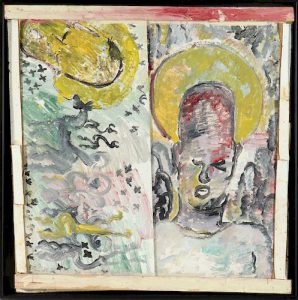 Rembrandt Harmenszoon van Rijn, one of the leading artists of the Dutch Golden Age, was among the most sought-after portraitists of his time. A draftsman and etcher, Rembrandt’s work explored the interplay of light and shade. His paintings are included in several of the world’s greatest museum collections, including the Rijksmuseum in Amsterdam, the Musée du Louvre in Paris, and the Metropolitan Museum of Art in New York. The upcoming New York City Estate Auction, offered by Showplace Antique + Design Center, will feature an etching of one of Rembrandt’s self-portraits. Executed around 1633, the self-portrait depicts Rembrandt in a cap and scarf.

A lithograph from George Wesley Bellows’ war series is also highlighted. Titled Sniped, the lithograph shows a group of soldiers in a trench encircling a fallen comrade. Bellows did not see combat in Europe, but his images are based on newspaper accounts and other published reports, photographs, illustrations, and soldiers’ stories. Also available in this auction are jewelry pieces by Christian Dior, Karl Lagerfeld, and Yves Saint Laurent. A yellow gold, diamond, and pearl necklace is also among the highlighted lots. This piece has twelve strands of freshwater pearls and fourteen brilliant-cut diamonds. Browse the full catalog and register to bid on Bidsquare.