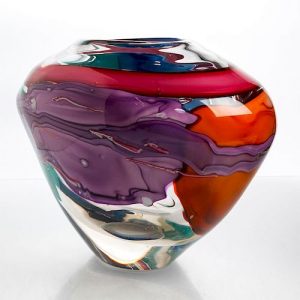 Sculpted of aluminum and measuring seven feet tall, Manuel Carbonell’s sculpture of two mythological tritons and a nymph is highlighted in the upcoming auction presented by Whitley’s Auctioneers. The first day of the Home and Interiors Auction offers fine and decorative art, glasswork, and collectibles. The sculpture at auction was created around 1982 by one of Cuba’s leading Modernist sculptors. Carbonell’s work has been found in museums and private collections around the world, including Shanghai, the Republic of Panama, and the Rose Garden at the American White House.

Royal Doulton figurines and collectibles are also featured in this sale. A kneeling jester flambé figurine modeled by Charles Noke stands out. Noke was one of Royal Doulton’s head designers and was given significant freedom in his early days at Doulton to pursue his own artistic aims. The available jester was made in the twilight of his career, around 1938, and is coated in a copper oxide glaze to achieve a deep red color. Various Doulton figurines and prototypes are both presented, as well as several shadowboxes of insect and mineral studies from artist Christopher Marley. View each of these lots and register to bid by visiting Bidsquare.