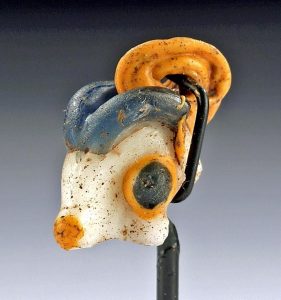 Sets of gilded brooches were worn throughout the Viking world on women’s cloaks, pinned with a chain between them. An example of these matching brooches from Gotland, Sweden will be offered in the upcoming Great Deals Antiquities Ethnographic Fine Art sale, presented by Artemis Gallery. The available set is made of 75% silver and includes serpent details on the gilded panels. The auction house notes that these would be considered luxury items indicative of wealth and status in Viking society. Another lot of interest in this auction is a 19th-century Victorian suit of armor with a matching helmet. Made of steel, this piece was made for display at home rather than battle.

Offering over 350 lots of ancient and ethnographic pieces, this event includes items from civilizations around the world. A Roman mosaic from the late Imperial Period is presented alongside bronze handles from the Near East. These leopard-shaped handles, likely made between 150 BCE and 225 CE, were cast using the lost wax or cire-perdue technique. The artisan would have poured molten metal into a wax model to create these handles, draining away the wax once the metal cooled. This matching set is detailed with incised spots on each leopard’s coat. Also available in this auction are several works of fine art, including an oil painting by William Draper. Titled White Cymbidium, this 1970s piece depicts white orchids native to subtropical Asia and Australia. Browse the full catalog for this sale and register to bid online on LiveAuctioneers.