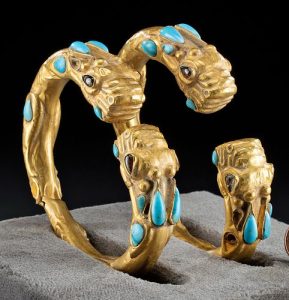 The Achaemenid Persian Empire, founded by Cyrus the Great in 550 BCE, is often regarded as one of the ancient world’s largest civilizations. This Iron Age dynasty was a global hub of art, religion, culture, science, and technology. The Achaemenids were fond of gold and silver jewelry and often used animal and mythological motifs such as lions, swans, ibexes, gazelles, and griffins in their jewelry. A pair of gold bracelets belonging to the Achaemenid Persian Empire is featured in the upcoming event, presented by Artemis Gallery. The bracelets feature zoomorphic head terminals, decorated with garnet eyes and turquoise ears.

Other notable lots include an Abbasid dynasty lustreware ceramic bowl, executed in the manner of Tang dynasty craftsmen. It is believed that a group of Tang Dynasty craftsmen were captured by the Abbasids and held for over ten years. During their period of captivity, the Tang craftsmen taught some Abbasids several techniques to give pottery a metallic glaze. The available white bowl is decorated with a blue flower motif and laurel leaves. Bidders can also consider a 19th-century American presentation sword, gifted to Lt. John B. Babcock. To view the complete catalog and register to bid online, visit Bidsquare.