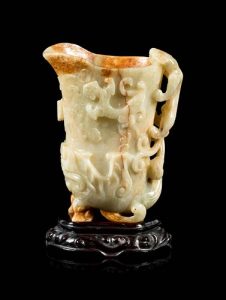 An Imperial folding fan from the Qianlong period will be offered in the upcoming Chinese and Southeast Asian Works of Art auction, presented by Hindman. The fan was created for the Qianlong emperor of the 18th century by three artisans of the Imperial cabinet: Ji Yun, Liang Shizheng, and Qian Weicheng. Liang painted the calligraphy of ten classic Tang verses chosen by the emperor, which describe vignettes of spring. The decorative piece also bears an inscription of the Imperial poem “Hanchun Shi” by Ji Yun beside a landscape painting. It depicts birds perched on begonia branches.

Another key lot is a 15-volume set of Dong Qi Chang’s calligraphic ink rubbings. Dong was among the most influential Chinese calligraphy masters in history. During his lifetime, Dong produced several noted calligraphic styles and theories. Also included is an illustrated research collection on ancient bronzes. This edition can be traced to the Yuan dynasty (1271 – 1368 C.E.). Explore the full listings and register to bid online on Bidsquare.