Artemis Gallery Showcases Ancient Art from Around the World 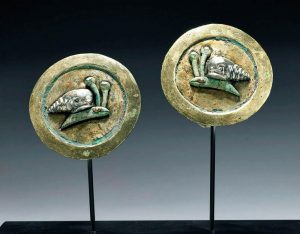 In pre-Columbian Peru, the Moche civilization thrived along the northern coast. They built complex cities and religious systems before the Inca came to dominate the region. Artemis Gallery’s upcoming Ancient & Ethnographic Art Through the Ages sale will highlight a pair of gilded copper earspools from this period. Silver and greenstone snails decorate each ornament. The auction house suggests that these earspools were worn by a wealthy lord and likely conveyed social or religious symbolism. Also in the auction is a pair of earspools dating back to the Sican or Lambayeque culture that grew in northern Peru between 750 and 1370 C.E. A crowned figure below a rising sun is shown on both spools.

The sale samples from cultures around the globe, including various Indigenous groups in Africa. Among the leading lots is a stool from the Chokwe people, an ethnic group spread across Angola, the Democratic Republic of the Congo, and parts of Zambia. The seat of the stool is supported by a woman holding her head. Cross-hatched patterns cover parts of her body as she gazes out through squinted eyes. Other notable lots in this event include a Byzantine religious gold cross, various ceremonial weapons, and Greek pottery. Interested collectors can place their bids online by visiting Liveauctioneers.