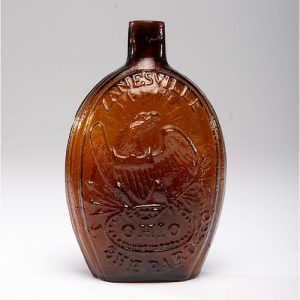 Born in Kentucky, Matthew Harris Jouett was a portrait painter active between 1800 and 1825. In his lifetime, Jouett painted many portraits of prominent Kentuckian figures, including the likes of Governor Isaac Shelby and Senator John Brown. One of the leading lots in the upcoming American Furniture, Folk, and Decorative Arts event, presented by Cowan’s Auctions, is Jouett’s oil on canvas portrait of Governor Isaac Shelby, an American Revolutionary War soldier. This portrait was likely completed during the early years of his career.

Another highlighted portrait is from Patrick Henry Davenport. The artist fell under the influence of Jouett, who provided him with informal training. He later became a noted portrait artist in the 1820s. Also included in the listings is an early 20th-century lantern, advertising ‘None Such New England Mince Meat.’ The lantern has four reverse painted glass panels that depict different images on each side: a pumpkin, an American flag, None Such Mince Meat, and None Such Condensed Soup. A whale’s tooth scrimshaw piece from an anonymous 19th-century artist referred to as the ‘Banknote Engraver’ is also available. To view the complete catalog and register to bid online, visit Bidsquare.