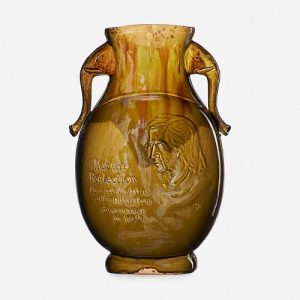 Phillip Ratner has developed expertise in a variety of mediums, including sculpture, painting, etched glass, tapestry, drawing, and graphic arts. Most of his works focus on stories from the Old Testament of the Bible. Drawing inspiration from these stories, Ratner founded the Israel Bible Museum in Safed, Israel, and later in Bethesda, Maryland. The second day of the upcoming Unreserved auction, presented by Rago, will include a glass panel by Ratner. In the piece, a dragon can be seen playing the harp.

Bringing together the works of noted artists such as Paul Jasmin, Alfred Porteneuve, and René Lalique, this sale will offer over 500 lots with no reserve. A leading item in the event is a Martigues centerpiece from René Lalique. Starting his career as a Parisian jewelry designer, Lalique gradually shifted his focus to work with glass. His sculptures gave rise to a technique that rendered contrast between clear and frosted glass. Beyond glasswork, this auction will also include fine art from Robert McLeod, several pieces of Asian art, and a 1960s Italian chandelier. Browse the full catalog for this auction and register to bid on Bidsquare.