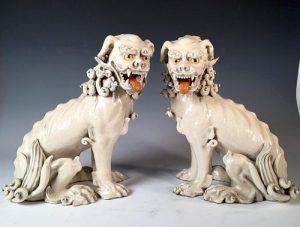 When the United States raised the cost of European silver imports during the 1840s, John Gorham, of Gorham Silver, saw an opportunity for domestic growth. Less than 20 years later, he was accepting commissions from Mary Todd Lincoln, the First Lady of the United States. A Gorham sterling silver flatware service is among the highlighted lots in the March Decorative Arts and Antique Auction, presented by Neue Auctions. The 139-piece set includes both dinner and cocktail forks, a cake server, and other items. Together, they are stored in a mahogany case.

Another kitchen piece featured in this auction is a Georg Jensen sterling five-piece coffee service. This set includes both a coffee pot and a teapot, along with containers for sugar, cream, and hot milk. Each piece has a carved handle and scrolled paw feet. While the company is known for its ornamental style, collaborating designers such as Johan Rohde began producing Modernist pieces during the early 20th century. The style quickly gained popularity and was later expanded by Georg Jensen.

Beyond the kitchen, bidders will also find several pieces of jewelry. These include a diamond engagement ring in 14-karat white gold. Also available is a sapphire and diamond ring. The center sapphire stone is flanked on both sides by diamonds. Like the previous piece, this ring is also set in white gold. Those interested in this or any other lot can register to bid online on Bidsquare.