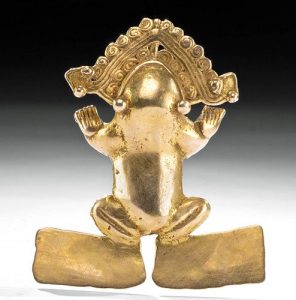 Leading Artemis Gallery’s mid-August Fine Antiquities, Ethnographic, & Fine Art sale is a Roman statuette of Cupid from the first to second century CE. Created during the transition from archaic to classical fine art styles, many Greek and Roman sculptors were combining realism with mythology. The available lot shows a child’s torso hugging a bird tightly to his chest. The auction house notes that this piece was likely created by a skilled artisan who could capture both human anatomy and delicate bird feathers. Another key sculpture on offer shows the draped lower body of a Greek Hellenistic goddess. Possibly depicting a Muse or Aphrodite, the sensually-posed piece would have been considered controversial in its time.

Outside of Greece and Rome, the sale will also feature items from South and Central America. Among these is a golden frog amulet from Panama weighing 56 grams. This pre-Columbian piece features a detailed ornament on the frog’s head and finger-like feet. Ancient Panamanian societies viewed frogs as symbols of rainfall and fertility, and the golden frog is still considered a lucky national symbol today. A group of Roman intaglios is presented as well. Those interested in more contemporary lots can consider a signed football from the 1960s signed by Vince Lombardi, Woody Hayes, Eddie Crowder, Bill Dickey, and others. Find more information on these lots and register on Bidsquare.