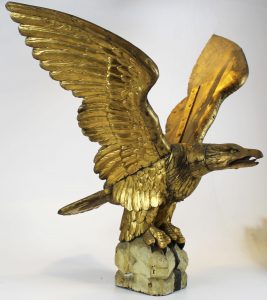 Winslow Homer’s painting titled Woodcutters will be available on the first day of Merrill’s Auctioneers and Appraisers’ upcoming December Americana and Fine Arts auction. Born in Boston, Homer began his artistic career as a commercial printmaker. He is considered a celebrated American painter of the late nineteenth century. His paintings often depict moments of human struggle, captured with free brushstrokes.

Antiquities and jewelry will also be offered in the sale. A cabochon emerald jadeite ring is featured. This piece is decorated with oval emerald jadeite, surrounded by a fine cased setting of 42 round cut diamonds. This ring is a Chinese family heirloom from the early 20th century. Other available lots include a carved wooden Pilot House eagle from the 19th century and a bronze banquet lamp shaped like an eagle’s leg and talon. To view the full catalog and register to bid, visit Invaluable