Ancient and Ethnographic Art Comes to Auction With Artemis Gallery 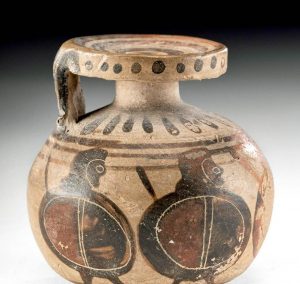 The ancient city-state of Corinth was situated on the Isthmus of Corinth, connecting the Peloponnese to Greece. Since 1896, various archaeological excavations of Corinth have been conducted by the American School of Classical Studies at Athens and the Greek Ministry of Culture, revealing insights into antiquity. One of the key lots at the upcoming Ancient / Ethnographic Art Through The Ages auction, presented by Artemis Gallery, is a Corinthian aryballos created between 575 and 550 BCE. With a circular rim and a wide handle, the globular vessel is adorned with depictions of warriors holding shields. It is also decorated with concentric circles on the rim and the base. In its time, this aryballos was used to hold fragrant oils and perfumes for bathing.

Another highlight is a sterling silver necklace with a chain made of 26 twisted silver pieces and a pendant resembling Thor’s hammer. It was created by the Vikings of Northern Europe between the 10th and 12th century CE. Thor’s hammer often appeared on religious amulets during the Viking era to invoke the spirit of the fertility god. These were typically designed in silver. To view the complete catalog of ancient and ethnographic art, visit LiveAuctioneers.