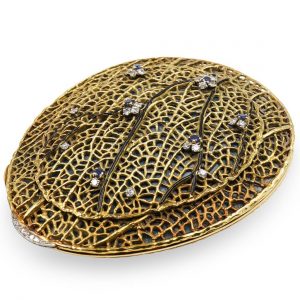 Jean Simon Deverberie, a Parisian sculptor and clockmaker, was active during a period of significant social change in French society. A 1791 piece of legislation removed mandatory guild memberships for craftsperson, allowing Deverberie the freedom to experiment with different techniques within his company. His style was influenced by Greco-Roman mythology, European exposure to Africa and the Americas, and Daniel Defoe’s Robinson Crusoe (1719). An early 19th-century example of Deverberie’s work will be offered in the upcoming Eclectic Collection & Estate Jewelry Sale, presented by Akiba Antiques. The available lot is a gilt and patinated mantel clock that depicts a Native American woman holding a bow and lance. Positioned at her feet is the head of a snake.

Drawing on themes similar to the Deverberie clock, collectors interested in mantel showpieces will find a 19th-century Baccarat crystal and ormolu clock. Egyptian-inspired sphinxes support the suspended face with a tasseled carpet placed between the figures. Also on offer is an ormolu and enamel clock from Victor Paillard, an 1830s sculptor who specialized in andirons, candelabra, and decorative clocks.

Representing the vintage pieces is a Tiffany & Co. 18-karat gold ashtray in the Art Deco style. The removable matchbox holder is a defining feature of this piece. A more contemporary lot is a Ballon Bleu unisex wristwatch from Cartier. The Ballon Bleu line, launched in 2007, is characterized by a small blue bubble at the three o’clock position. This sale presents over 600 lots focusing on both jewelry and decorative art. Those interested in these or any other lots can find more information and place a bid on LiveAuctioneers.