A84: May Exceptional Antiquities Sale 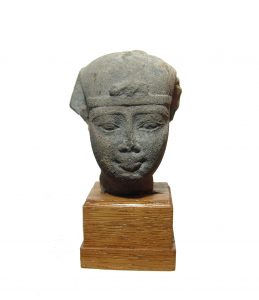 During the Cretaceous Period, much of western North America was covered by shallow seawater. As the water receded, it left behind large quantities of sediment, which paleontologists still study today. This includes the Hell Creek Formation, a 300-foot-thick ancient deposit near Jordan, Montana. The tooth of an adult Tyrannosaurus rex uncovered in the Hell Creek Formation is among the highlighted lots in the May Exceptional Antiquities Sale, presented by Ancient Resource Auctions. The unbroken, fossilized tooth measures 4.25 inches around the base.

Those interested in extinct species can also consider an auroch’s skull. Believed to be the ancestors of domestic cattle, the last recorded auroch died in Poland in 1627. However, this example is far older, between 25,000 and 10,000 years old. Both horns remain intact. Also available is an Egyptian sarcophagus lid. The piece is decorated with an image of the goddess Ma’at, who kneels and stretches out her wings. Register to bid and view each of the lots on Invaluable.