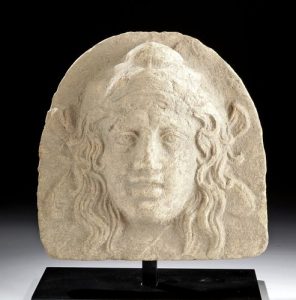 Artemis Gallery will present over 300 items in the upcoming Antiquities & Ethnographic Art auction. Featured is a religious Roman stone mosaic from the fourth or fifth century. This piece shows a saint holding a scepter and wearing a pendant. He stands with one leg crossed in front of the other; above his head is a Roman inscription. Likely created after the rule of Emperor Constantine—the first Roman Christian emperor—the mosaic may have been designed for a church, temple, or private Christian residence. Other religious works from around the world are also offered, including an 11th-century Indian statue of Krishna/ Vishnu. Krishna holds a lotus blossom in one hand and a shankha or sacred shell in the other. This piece was also likely intended for a temple or religious space.

Another lot of interest is a mummified Nile perch. The fish was sacred to the goddess Neith and was likely preserved during Egypt’s Third Intermediate Period or later. Ethnographic art from Africa and Oceania will be included as well, including several decorated human skulls from the Asmat people of West Papua. One is covered with wood, feathers, shells, and beads, while the other is dominated by a boar tusk. A 115-pound piece of the Campo del Cielo meteorite is also included. Browse the complete catalog and register to bid on Bidsquare.