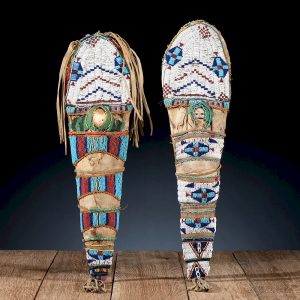 The James B. Scoville Collection auction, presented by Cowan’s, is a 204-lot event featuring fine art and ethnographic pieces from the 19th and early 20th century America. The lot with the highest estimated value is a painting by C.M. Russell, “Inspection of a Permit”. Russell worked as a cowboy and briefly lived with the Blood Indians during America’s Wild West era. The watercolor piece “Inspection of a Permit” depicts a Candian mounted policeman examining the papers of a Native American man. The subject matter attests to Russell’s devotion to recording even seemingly mundane events in a Native American’s life.

Those looking for a more affordable lot should consider “Looking for Trouble”, also by C.M. Russell. The drawing depicts several Native American men on horses in battle formation, with plenty of gear. Russell lived long after America’s Wild West era, and his art was one of the ways, along with advocating for reservations, by which he honored Native Americans well into the 20th century.

Beyond Russell’s artwork are notable pieces of weaponry. Like a cartouche knife along with a quilled hide sheath from the Great Lakes tribes. The sheath’s hide was slightly tanned with multi-colored quillwork. Quill worked pieces were useful not only to sheath the tribes’ weapons but also served as valuable trading tools with European Americans. Historical weapon collectors should also consider the Henry Rifle. The rifle is considered by many to be an iconic part of the Wild West era in America. You can view each of these lots and register to bid online on Bidsquare.