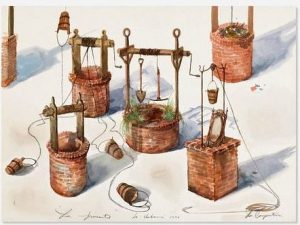 The Cuban artist collective known as Los Carpinteros dismissed individual authorship to embrace the ideals of artisans and laborers. To Los Carpinteros, art is always a collaborative effort. Several of the collective’s works are up for bid in the upcoming 20 | 21 Art auction, offered by Rago.

Also in the sale are two works by English sculptor Ralph Brown, one of which depicts a woman standing in the wind. It is inscribed: “Display no more, in vain, the lofty banner! For see! Where on the tier before ye lies the pale, the fall’n, the untimely sacrifice to your mistaken shrine, to your false idol, Honour!” This sculpture is from an edition of five and was issued by Pangolin Editions.
Another English artist represented in the sale is Damien Hirst with a heart-shaped “spin painting.” Hirst has created many spin paintings since he first experimented with the technique in the early 1990s and has often suggested that they be displayed while continuously rotating. Other artists in the sale include Harry Calahan, Martín Ramírez, Jan Yoors, and more. View any of these lots and register to bid on Bidsquare.