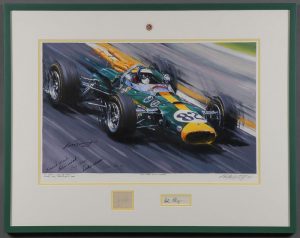 Also highlighted in this auction, presented by Jackson’s International, is a pair of paintings by Ukrainian artist Alina Semenenko. One depicts a standing nude woman; the other shows the same woman seated. They are titled Vika and Nude and signed in Cyrillic script. Also included is an original Formula One painting of Jim Clark driving the Lotus 38 Ford to victory in the 1965 Indianapolis 500. The acrylic painting by Nicholas Watts features the signatures of both the artist and Clark’s team, including the Wood Brothers, Bob Dance, and Len Terry. Register to bid for the above items by visiting Invaluable.