Property from the Estate of Loretta Young Online Only Auction 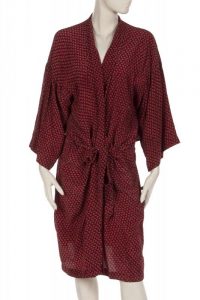 In 1947, actress Loretta Young won the Academy Award for Best Actress for her role in The Farmer’s Daughter. “You know up until now… the Academy Awards has been a purely spectator sport for me,” Young said in her acceptance speech. “However, tonight I dressed for the stage just in case.” The upcoming auction of items from Loretta Young’s estate is presented by Julien’s Auctions. Clothing and accessories worn by Young, along with furniture she used on set during various projects, are highlighted in the event.

Young’s Blackglama full-length ranch mink coat is a featured piece. Her monogram at the time, “LYL” for Loretta Young Lewis, is embroidered on the coat’s interior. Collectors of vintage clothes can also consider a lot with three of Young’s hats. A cream lace Lilly Dache “Dachettes” hat is available in this lot.

Coming to auction from the set of a television show is a Qing Dynasty ironwood horseshoe chair. The piece appeared in several episodes of The Loretta Young Show and was hand-picked by Young’s mother, who was a Hollywood interior designer. The Loretta Young Show was an anthology series that ran for eight seasons and earned Young three Primetime Emmy Awards. She was the first actor ever to win both an Emmy and an Oscar.

Two tops designed by Young’s third husband, Jean Louis, are also available in this auction. Louis was a Hollywood dress designer, and the two lots available lots are a blue crepe blouse and a silk dressing gown, respectively. Rounding out the auction’s featured items is a bracelet given to Young (then Loretta Young Jean) from Frank and Nancy Sinatra. The 14-karat gold link bracelet comes with a charm reading “Merry Xmas Jean/ The Sinatras 1947.” View each lot and register to bid on the Julien’s Auction website.