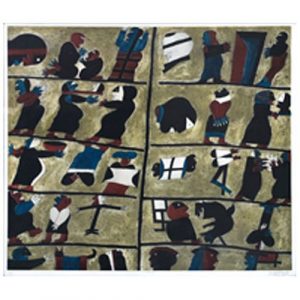 Morton Subastas will offer a selection of photography and prints from artists such as Sergio Hernández, Pablo Picasso, Juan Soriano, and many others in the upcoming auction. Hernández is a Mexican Post-war and contemporary painter. Born in 1957, he is known for painting art as he witnesses it. A signed woodcut by Hernández is showcased in the sale. Titled Danza Negra, the 2011 woodcut shows black, anthropomorphic forms on a yellow background.

Unsigned lithographs by Pablo Picasso can also be found. One of the most influential artists of the early 20th century, Picasso was made famous for his painting Guernica, which was inspired by the 1937 bombing of the titular city during the Spanish Civil War. In this auction is a set of 25 Picasso prints in a range of artistic styles. Born in Mexico, Juan Soriano was a child prodigy and a pivotal painter in modern Mexican art. A signed and dated etching and aquatint by Soriano is featured as well. This piece, titled Gato, shows a cat on a tree limb with leaves. View the entire collection and register to bid at Bidsquare.