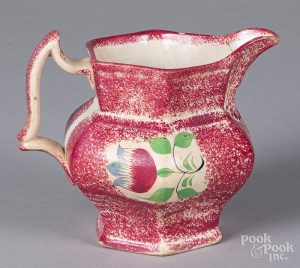 J.E. Caldwell & Co. was established in the 19th century when Henry Blanchard Dominick joined forces with Leroy B. Haff. The silverware company eventually became a leading producer in the industry. Through the 1850s, they produced silver in a pattern known as ‘Washington Reproduction.’ In the upcoming Online Only Decorative Arts auction, a Washington Reproduction tea and coffee service from J.E. Caldwell & Co. will be available.

Pook & Pook will bring a pair of watercolor portraits from James Ellsworth to the event. Between 1840 and 1860, Ellsworth developed his signature portrait style. Most subjects of his miniature portraits sat on a Victorian armchair against a cloud-like backdrop. Ellsworth would eventually become one of the leading folk art painters of Pittsburgh, Pennsylvania. Representing the available oil paintings is the work of Antonio Martino. Born in Philadelphia, Pennsylvania, Martino was a noted American painter. He initially started as a sculptor but later turned to drawing and painting after attending lectures at the Graphic Sketch Club. His paintings mostly centered on the scenery of Pennsylvania’s Manayunk region. Those interested in these or any other items can register to bid on Bidsquare.