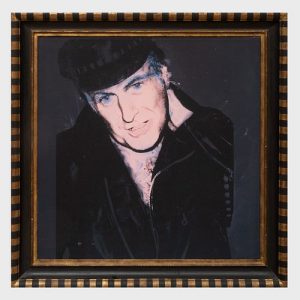 Day two of this Stair event brings to auction more pieces from the collection of Sir John Richardson, the late art historian. This includes a study of two male nudes and a Greek athlete by Swiss-born artist Johann Heinrich Füssli. Forced to flee Switzerland as a political refugee, Füssli eventually found himself studying in Rome. The work of Renaissance artists such as Michelangelo inspired Füssli to explore nude figures, of which this piece is an example.

Also featured are two untitled latex and rubber pieces by Alexander Hoda (lots 283 and 284). The works combine elements that are equal parts human, animal, and industrial into one dark mass. With pieces like these, Hoda aims to tap into the viewer’s interest in the macabre. “I don’t want my work to be seen as vulgar or offensive,” says the artist, “but I don’t think any art should be viewed in terms of its beauty either.”

Bidders will also find a painting of Sir John Richardson based on a photograph and painting Andy Warhol made of the scholar. Richardson gifted the original piece to the Tate Britain in 2017. Those interested in these pieces can register to bid on Bidsquare, or continue reading on Auction Daily.