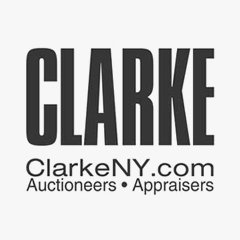 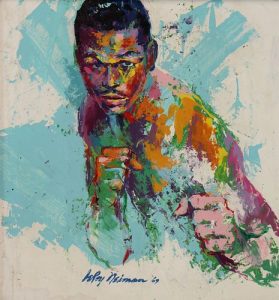 Undefeated in 93 professional fights and six times a World Champion in boxing, Sugar Ray Robinson is still considered one the greatest boxers in history. Dubbed “Sugar” for his sweet personality outside the ring, his birth name was Walker Smith Jr. He had to borrow the “Ray Robinson” name and persona from another boxer to enter professional fights. A painting of Robinson by LeRoy Neiman is up for bid in the upcoming Jewelry, Fine Art, Antiques, Midcentury, and Asian Estate Auction. This Clarke Auction event includes 475 lots of jewelry, furniture, and fine art along with other collectibles.

The daughter of furniture-making legend George Nakashima, Mira Nakashima’s works honor those of her father with their simple yet unmistakably sleek design. A set of eight grass chairs from the younger Nakashima will be available, notable for their unique weaving. An etching signed by Pablo Picasso showing a nude pair is also featured in the auction. Other lots such as a Tiffany Studios crocus lamp and an early 19th-century micro-mosaic plaque may also be of interest to collectors. To view the entire catalog and to bid, visit Bidsquare.