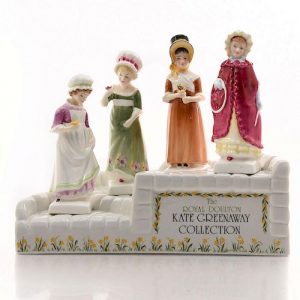 The popularity of Royal Doulton figurines has sustained the stoneware company, a change from its start as a manufacturer of drain and water pipes. With various innovations and experiments with different mediums, Doulton’s artistic pottery was most popular after 1913, particularly for its HN series of Pretty Lady figurines.  The upcoming auction presented by Whitley’s Auctioneers offers a collection of this Doulton Lambeth and Burslem pottery. From the NH series is a figurine of a baby Cupid riding a crocodile. The allegorical figurine is among the only two examples produced by Doulton designer Charles Noke.

Other porcelain figurines available in this sale were made by Boehm pottery. A Bengal tiger figurine created by self-taught sculptor Edward Marshall Boehm is a highlight. The inspiration for his animal figurines was derived from Boehm’s early occupation as a cattle breeder, where he learned about animal anatomy and forms. He would go on to integrate that knowledge into his sculptures. The auction also includes Royal Worcester porcelain articles and Connoisseur sculptures. Explore the full listings and register to bid online on Bidsquare.