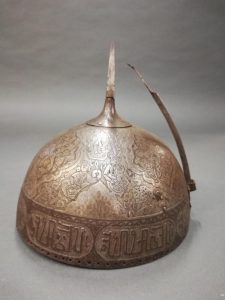 Quinn’s Auction Galleries will present masks, jewelry, instruments, and vessels from Africa, South America, and Melanesia in the upcoming Collector’s Series: Ethnographic Arts Auction. Available is a Yoruba Egungun mask from the 20th century. Carved out of wood, this helmet mask resembles a wide face with large protruding eyes, tall hare ears, and decorative scarification marks on both cheeks. Legends associated with the Yoruba community tell that the Egungun masquerade originated during the 17th century. The Yoruba men wear costumes and masks to honor ancestors and the newly deceased during this Egungun festival.

An available 20th-century Asante ceremonial sword is pierced along the outer cutting edge and has a wooden hilt covered with gold sheet. The use of swords in Asante society began near the end of the 16th century when they were used as practical weapons. With time, the swords took on various ideological and ritual roles. Dull blades, sometimes with openwork, show they were not intended to be functional weapons. The auction also presents a wooden figurine of the Madonna and child. Explore the full listings and register to bid for these items on LiveAuctioneers.