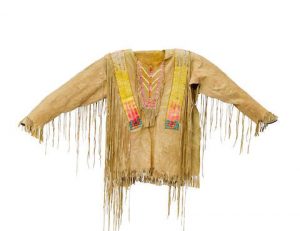 Sap-Ut-Ka-Low-Nee (White Swan) was dubbed “Poker Jim” by United States Army soldiers during the Bannock War of 1878. Poker Jim was a well-respected and popular Pendleton known for his love of poker games. One featured lot in this auction is a Fort Berthold man’s quilted shirt associated with Poker Jim. The shirt is made of soft pink hide. It has open sides that are secured with ties. The quillwork is consistent with the Fort Berthold style, with fringed strips running the lengths of the arms and over each shoulder. The shirt features cross and bear claw motifs and measures 32 inches in length and 63 inches in width.

A 1906 orotone photograph by Edward Sheriff Curtis is also highlighted in the auction. Titled The Scout – Apache, this orotone is presented with an original glazed Curtis Studio frame and is signed in the lower right. The orotone features a Native American man sitting on his horse.

Collectors will also find a 1995 sculpture by Matthew Panana. This sculpture, titled Watching the Dance, is made of carved onyx. It is signed and dated on the base. To view more lots and to place a bid, visit Bonhams.