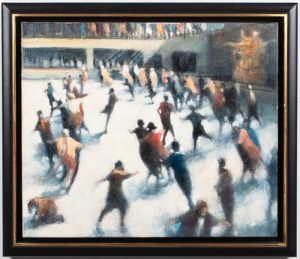 A painting titled Rockefeller Skaters from Bill Jacklin will be offered by Showplace Antique + Design Center in the upcoming New York City Estate Auction. Depicting a winter scene in New York City, the oil painting from around 2006 shows a crowd of ice skaters in undefined forms, colored in hazy, dark shades. Jacklin began his career as a graphic designer but later realized his interest in painting. He eventually became a figurative artist in the mid-1970s, experimenting with the effects of light and movement.

Much like Marc Chagall and Ben-Zion Weinman, artist Abraham Rattner turned to Biblical stories for inspiration. He believed these stories would help make sense of a chaotic world. According to Sacred Art Pilgrim, Rattner believed that his Expressionist works reflected “that greater reality of nature created by God and intuitively sensed by man.” His painting titled Head & Flowers is available in this sale. Silver flatware from Georg Jensen and an oil painting by Ben Shahn are also available in the auction. View the entire catalog and register to bid on Bidsquare.