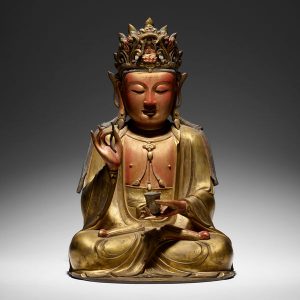 Cloisonné enamel gained popularity in China during the early 14th and 15th centuries under the reign of the Ming Xuande emperor. This technique first arrived in the western province of Yunnan, where it became known as Dashi ware. Originally intended for the furnishing of temples, cloisonné objects were later showcased in the courts of the Ming and Qing dynasties. A cloisonné enamel tripod censer is among the featured items in the upcoming Asian Art sale, presented by Rago.

Asian art collectors can also consider a figure of Guandi. During the Han dynasty, a Chinese general named Guan Yu was captured and executed in a battle. After his death, his popularity increased among the common people. In 1594, a Ming dynasty emperor canonized Guandi as “the god of war.” He has since been worshipped as a symbol of loyalty, righteousness, and bravery. Also available is a Japanese okimono sculpture depicting an eagle spreading its wings. Those interested in this or any other piece can register to bid on Bidsquare.