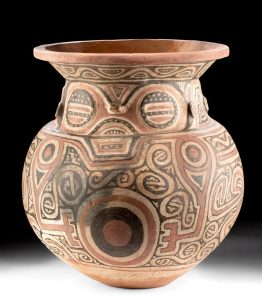 Jaguars were considered divine felines in the ancient Americas, often shown as a deity in pre-Columbian myths and legends. They were also used as a symbol of power and kingship. Influential figures often added the jaguar epithet to their names to associate themselves with this power. Highlighted in the upcoming Antiquities | Asian | Ethnographic Art sale, presented by Artemis Gallery, is a pre-Columbian copper ring adorned with four jaguars. Each animal has inlaid turquoise eyes, as well as perky ears, curled tails, and open mouths with bared teeth.

Several pieces of pottery will also be available in this auction. Among these is a Marajoara urn. This ceramic funerary urn shows abstract but anthropomorphic faces and upper bodies painted on opposing sides. The faces seem to be female, a common theme in figural Marajoara pottery. A rare Chorrera snuff tray will be offered as well. Snuff trays were part of the elaborate battery of objects manufactured by ancient Andeans to ingest a ground drug known as Vilca or Huilca. These trays feature fantastical motifs and forms. Explore these items and register to bid online on LiveAuctioneers.