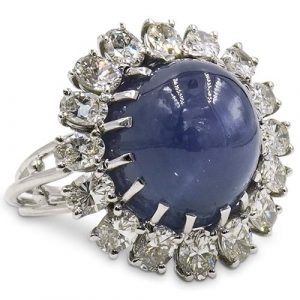 In late 1800s Europe, empire waistlines were out and the medieval look was in. Wealthy women began to favor an ultra-luxe style that emphasized precious metals. It wasn’t until the 1920s, however, that this style became accessible to the masses. Flappers paired their straight-lined gowns with gold mesh purses, often accented with elegant details. An example of these chainmail-inspired mesh purses will be available in Akiba Antiques’ upcoming November to Remember Auction. Collectors of jewelry and accessories will find several other notable lots in the catalog, including a star sapphire ring and a Tiffany & Co. diamond eternity band.

From Belgian artist Odile Kinart is a figural bronze sculpture depicting a seated man and woman. The pair have rounded heads and prominent facial features, a style that Kinart picked up from her studies of pre-Colombian cultures. Among the other available fine art pieces is a painted notebook by Purvis Young. A shining star of the 1970s, Young was a self-taught artist who turned the streets of Miami, Florida into a canvas. “My feeling was the world might be better if I put up my protests,” he said about his work. “I figured the world might get better, it might not, but it was just something I had to be doing.” Many of the artist’s recurring images of pregnant women, railroad tracks, and horses can be found in this notebook. Find more details on each of these lots and register to bid on LiveAuctioneers