Ancient / Ethnographic Art Through The Ages 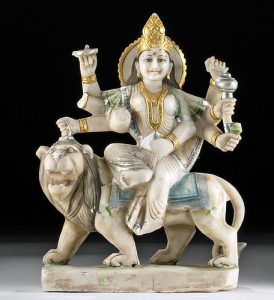 The upcoming Ancient/ Ethnographic Art Through the Ages auction, presented by Artemis Gallery, features an Egyptian shabti. The funerary figurine was intended for Khaemwaset, the revered fourth son of Ramesses II. He was the first Egyptologist to document Egypt’s Old Kingdom monuments, which were over 1,000 years old during his lifetime. Khaemwaset restored many of these early monuments, and some bear his inscriptions. The available turquoise-hued mummiform prince figurine stands erect with his arms crossed.

The auction also offers over 40 lots of decorative art. Highlighted among them is a copper-silver alloy plaquette. It features a mounted warrior on horseback at the center flanked by four goddesses who hold cornucopias at either end. According to scholars, the riding warrior was a deity of ancient Thrace. He was referred to as the Thracian Horseman, Thracian Rider, or Thracian Hero and was a symbol of victory and strength. An early Egyptian yellow breccia bowl is also notable. The use of breccia was sporadic in ancient Egypt, and only a few pieces were commissioned by the wealthy. View these items and register to bid online on Bidsquare.