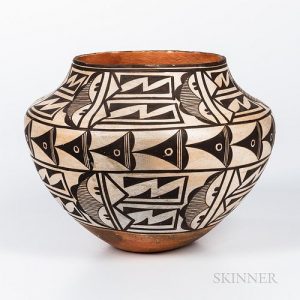 Featured in Skinner’s upcoming American Indian & Ethnographic Art sale is an effigy grease bowl from the American Northwest coast. This piece takes the form of a human and octopus, decorated with a bone and shell inlay. Likely made by the Tlingit people around the 1870s or 80s, the ornate details of this piece suggest it served a funerary or ritual use. Also from the Northwest is a carved shaman’s oracle sculpture from the 19th century. This piece, made of a whale tooth, resembles a clan chief wearing a traditional hat. Because shamans were believed to bridge the gap between deities and humankind, they often used carved objects to communicate their spiritual revelations.

Beadwork is also on display in this event. Especially featured is a pair of matching beaded saddlebags from the Central Plains. The front of each bag is decorated with white, red, and green Lakota designs above a long leather fringe. A beaded doctor’s bag, also from the Lakota people, is highlighted as well. Made in the 1880s, this commercial leather bag is completely covered in glass and faceted brass beads. Pottery, sculpture, and traditional weapons will also come to auction. Explore the full listings and register to bid online on Bidsquare.