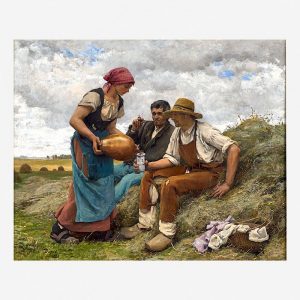 Paul Howard Manship was an Art Deco sculptor whose modern style and subjects were largely inspired by classical forms. An example of his work is available in the American and European Fine Art Auction, presented by Rago. The featured bronze carving by Manship entitled Adjutant Stork shows the standing bird on a marble base. Alongside sculpture, the upcoming sale will also offer a range of drawings, watercolors, mixed media works, paintings, posters, and prints.

One of the many artists who turned to dance for sculptural inspiration was Harriet Whitney, whose sculpture will be presented in this auction. Two nude dancers balance on tiptoe, stretching upward and outward in imitation of a dance. Also among the featured lots is a set of two watercolors, gouache and gum arabic on paper by Herman Henstenburgh. A still-life and natural history painter, Henstenburgh is credited with inventing a new technique for creating realistic watercolor paintings.  Visit Bidsquare to browse the full catalog and register to bid.