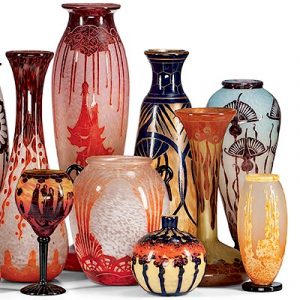 The 20th Century Design auction, offered by Skinner, presents nearly 600 lots. These pieces range from New York hotel decorations to Art Deco tables once owned by John Lennon and Yoko Ono. The Barbizon-Plaza Hotel in New York City was designed specifically for musicians and artists. The hard work paid off when the Barbizon became a meeting place for notable figures such as Frieda Kahlo and, decades later, The Beatles. Available in this auction is a frieze panel from the hotel. Sculpted in this aluminum relief are three paintbrushes, a reminder of the hotel’s efforts to attract artists. Artifacts like this panel were saved from destruction when the hotel was demolished to make room for Trump Parc condominiums.

Several lots in this auction come from the former owners of Antiquers III, a now-closed antique store in Massachusetts. This includes several French glass vases designed around 1925. One featured vase is decorated with purple flowers and, at its base, orange roots. Also coming to auction from the Antiquers III owners are two Art Deco console tables. The tables were owned by John Lennon and Yoko Ono. The lot comes with a note from Ono that reads, in part, “These objects are things John and I loved in different periods of our lives, and are the only objects that will be released to the public. Register to bid for this event on Bidsquare.