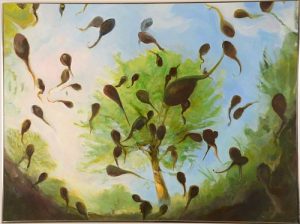 This timed auction, presented by the Attleboro Arts Museum, will benefit the museum’s operations and ongoing programs. Among the featured lots is Carolyn Hagy Kent’s A Tadpole’s Perspective. The painting places the viewer among a school of tadpoles, looking up at the trees above. Kent entered the art community later in life, and she encourages others in similar situations to not be intimidated. “[A]rtists are born to be artists but sometimes they don’t know it right away,” says Kent.

An animation cel from Disney’s Robin Hood (1973) is also available. The cel shows King John and Sir Hiss, the antagonists of the film. While working on The Aristocats (1970), writer Ken Anderson came up with the idea to recreate the Robin Hood legend with animals. The movie went on to inspire such animated films as Zootopia (2016).

Rounding out the top lots is a jigsaw puzzle by Sarah Jane Lapp and Philip Gruppuso. The work explores contradictions, including the divide between the sacred and the profane. The puzzle’s warm color palette connects these many juxtapositions. Those interested in this or any other work can register for the sale on Bidsquare.