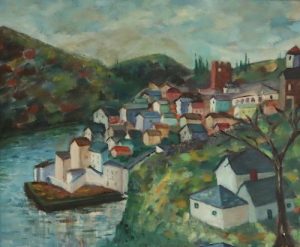 Available in the upcoming Unreserved Fine Art Storage Sale offered by Clarke Auction Gallery are nearly 200 lots of paintings and sculptures. These items have remained in storage due to non-payment or lack of placement in another event. They come to auction this March with no reserves. Several oil paintings from Xavier Cugat will be featured. Cugat was best known as a bandleader and composer who helped popularize Latin American rhythms in the mid-20th century. When he was not making music, he worked as a cartoonist for the Los Angeles Times. The available pieces show amorphous beings in humorous settings, including a group of surgeons operating with a pitchfork (while one reads Playboy magazine) and a yellow-hatted figure asleep in a dense patch of watermelons.

Other lots of interest include a signed watercolor painting by Alexander Dobkin, an Italian-American artist who frequently examined childhood innocence in his work. This framed lot shows a mother holding her baby to her face. Domestic scenes from Irwin Greenberg are also offered, including an oil painting of a woman reading a book. Behind her, a window pours light into the room. View the complete catalog for this auction and register to bid by visiting Bidsquare.