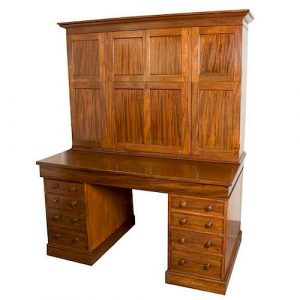 The Arts and Crafts movement was formed at the end of the 1800s by a group of British painters, designers, and watercolorists who sought to embrace a new type of design. It is characterized by simplicity and elegance, a departure from the prevailing Victorian style. Stash by Lee Stanton presents several furniture lots influenced by the Arts and Crafts movement in their upcoming auction. Included among these pieces is an oak table from England. Produced in the 1940s, this table has a slatted base and a double stretcher at the bottom. This auction also showcases 19th-century Swedish chairs. Much like Arts and Crafts design, Swedish style is also marked by Minimalism, simple lines, and functionality. It came to prominence in the 1950s in America and Europe for its aesthetic appeal. The available set of six Swedish chairs can be used as dining or accent chairs.

Another lot of interest is a George III fan light. The featured piece is a fan-shaped light from the 18th century. Mostly popular in England, these lights were in use many years after the reign of George III ended. Explore the full listings and register to bid online on Bidsquare.