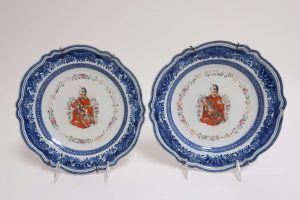 Pottery dogs were often used as funerary objects during China’s Han dynasty period. Archaeologists discovered that pottery dogs were buried alongside their owner’s tombs in Nanyang. Many people believed dogs were able to protect them from evil and help them enjoy a peaceful afterlife. The first day of the upcoming Winter Antiques Sale, presented by Litchfield County Auctions, will feature a pottery dog from the Han Dynasty. Beyond pottery pieces, the auction also includes porcelain vases, sculptures, dinnerware, and more.

Notable lots in this sale include a vase by Baccarat and Erté. One of the early leaders of the Art Deco movement, Erté created the vase in collaboration with the French luxury crystal brand in 1985. The handcrafted vase was produced in a limited edition of 199 pieces. Another lot of interest is a Japanese silk tapestry. This piece was woven using a palette of browns, greens, and ochres, embroidered with three-clawed dragons among clouds. It is believed that the Japanese dragon represents power and prosperity. Explore the full listings for this sale and register to bid online on Bidsquare.