The Beatles At The Hard Rock 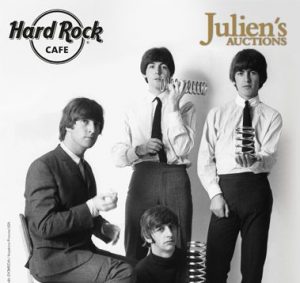 The upcoming Beatles at the Hard Rock sale, presented by Julien’s Auctions, offers nearly 300 Beatles-themed items. Available is a selection of never-before-seen memorabilia, autographed objects, guitars and instruments, obscure licensed material, and vinyl albums. Held on the 50th anniversary of the band’s dissolution, the auction will be held online and live at the Hard Rock Café in New York. Leading the auction is an original copy of Paul McCartney’s handwritten lyrics to Hey Jude, used during a 1968 recording session. The ballad evolved from Hey Jules, a song McCartney wrote to comfort John Lennon’s son, Julian, during his parents’ divorce.

A Spalding baseball signed by all four members of the Beatles will be featured as well. After their final US concert at San Francisco’s now-demolished Candlestick Park in 1966, the band signed the baseball for a stadium employee. The wooden stage from the first Beatles performance will also be offered. The stage was present at Lathom Hall in Liverpool in 1960, where the band performed under their original name, The Silver Beats. Browse the full catalog and register for online bidding on the Julien’s Auctions website.