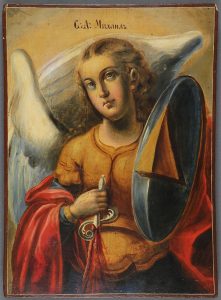 The upcoming Summer World Treasures Auction will offer 1,002 lots over two days, including decorated glass vases, fine art, and porcelain. Several Mary Gregory vases are featured on the first day of this sale, which will be presented by Jackson’s International Auctioneers and Appraisers. Imitating popular English cameo glass, Gregory produced decorated glass products near the end of the 19th century. On a pair of her matching black vases, Gregory shows a young girl peeking at a bird’s nest. A winged child looks back from inside the nest.

The second day of the auction brings an oil painting on a wood panel by Ivan Pavlovich. After his exile to Belgium, Pavlovich became a noted post-Impressionist painter. In the following years, Pavlovich spent most of his time touring France and Russia and working on his miniature landscapes. He was known for painting tiny representations of human figures in fields, gardens, and Parisian street scenes. The highlighted lot shows the city of Rue Port-Neuve, with people wandering about in the snow. View the complete catalog on the Jackson’s International Auctioneers and Appraisers website.