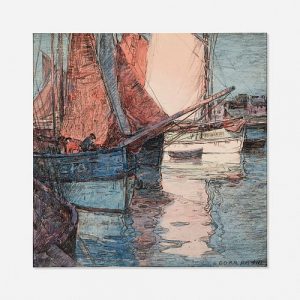 American painter John Whorf was an acclaimed watercolorist of the 20th century. Whorf’s father, who was also an artist, introduced his son to commercial art and graphic design. Later in his life, Whorf was influenced by Charles W. Hawthorne’s bold style of painting. This September, the Spanierman Works on Paper auction, presented by Rago, will highlight Whorf’s work. Titled Summer Morning, one watercolor on paper piece portrays the busy streets of Times Square with a vibrant palette.

The auction also presents the sketchbook of Theodore Robinson. Also an American painter, Robinson was popular for his Impressionist landscapes. He was also considered one of the first Americans to take up the Impressionist style. The works in his sketchbook were completed with graphite on paper. Within the pages, bidders can observe a man riding a horse and a man on a one-wheeled cart. The sketchbook holds an inscription and is dated 1888. For more information, visit Bidsquare.