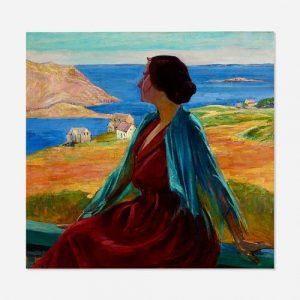 In the 1880s, John Haberle took a humorous approach to his trompe l’oeil paintings (French for “fool the eye”). The upcoming Spanierman auction, presented by Rago, will feature one such whimsical painting by Haberle. Featured is a self-portrait titled That’s Me, painted in shades of chestnut, beige, and brown. Explaining the artistry in his works, the National Gallery of Art writes, “He was also an artist of great aesthetic sensibility and inventive power.” Rather than basing his paintings on reality, Haberle intended to convey irony and entertainment through his work.

Charles Courtney Curran’s oil painting is another highlight of the auction. Best known for his sweeping landscapes featuring young women and children, Curran often used the Impressionist style in his artworks. The red-haired nude woman in the offered painting wears a wreath and is surrounded by leaves. Also included is a portrait by Russian-American painter Ivan Olinsky and a landscape titled Frosty Morning by John Francis Murphy. Explore the full listings and register to bid online by visiting Bidsquare.