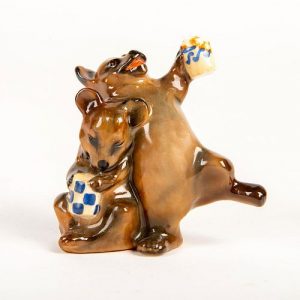 Since 1815, Royal Doulton has built a reputation as a leading manufacturer of ceramics. They originally created pipes for drains and other bathroom ceramics before specializing in decorative art. In the upcoming Collector’s Auction, offered by Whitley’s Auctioneers, is a variety of Royal Doulton ceramics. Featured is a vintage Royal Doulton RSPCA collection box. This charity box shows a porcelain seated dog on a wooden base. It was issued in 1900 for the Royal Society for the Prevention of Cruelty to Animals.

Another Royal Doulton figurine included in the auction is a figure of two bears drinking. Issued between 1927 and 1936, this porcelain figurine has been hand-painted and glazed. Figurines by Germany’s Sitzendorf and Volkstedt can also be found. To view the entire collection and to place a bid, visit Bidsquare.