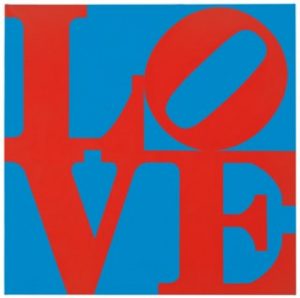 Robert Indiana’s LOVE motif has become ingrained in American culture, recognizable in its simplicity and branding. However, the Pop artist struggled with the legacy he created: “Love bit me. It was a marvelous idea, but it was also a terrible mistake… it became too popular.” Two of Indiana’s LOVE paintings will be offered in the upcoming Post-War to Present auction, presented by Christie’s. Both were painted in 1967, following Indiana’s split with his on-again-off-again lover and his rising frustration with the Vietnam War. The Whitney Museum of American Art’s Barbara Haskell has explored Indiana’s conflict with his own work: “He saw it as a precarious image that came out of his disappointments in love—that tilted O suggests the instability of relationships.” One of the available paintings has the word written in red against a blue background, while the other is blue on a red background.

This auction presents work from contemporary artists alongside the artists of the 1950s and 60s. A 2012 acrylic painting by KAWS reflects the evolution of social commentary since Pop Art. The shaped canvas resembles a figure jumping from the ground with his arms thrust behind him. A smaller, circular canvas is placed below. KAWS’ work has seen increased attention in recent years, moving from the streets to galleries and museums. Another street artist featured in the sale is Eddie Martinez, a New-York based artist represented in the auction with three paintings. Martinez attributes his rapid painting method to his background in graffiti, noting the value of making precise strokes quickly and efficiently.

A selection of silkscreen prints from Andy Warhol will be offered, as well as a sculpture by Keith Haring, several pieces by Tom Wesselmann, and a lacquered wood screen by Roy Lichtenstein. Browse the full selection of post-war and contemporary art by visiting Christie’s website.