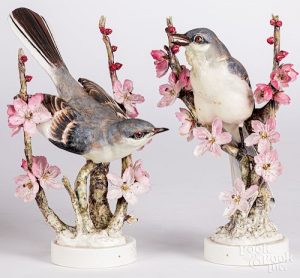 Starting its production in 1889, the Munson Typewriter Company has introduced to the world some prominent typewriter designs. The Braille-writer and the Munson followed with its improved versions are the popular models by the makers. The Munson 1 typewriter by designer Samuel John Seifried with a horizontal type cylinder has a visible display of its mechanics. Pook & Pook auction offers an early version of the Munson 1 typewriter in their upcoming Online Only Decorative Arts auction.

Among other collectibles, a set of twelve sterling silver fox hunting julep cups by silversmiths Porter Blanchard is the highest valued lot. Fifty-six volumes of The Gentleman’s Magazine and Historical Chronical are examples of some early American magazines. The auction also highlights multiple porcelain and wooden antiques, along with varieties of silverware articles from companies like Gorham, Lunt, and others. Explore the full listings and register to bid online on Bidsquare.