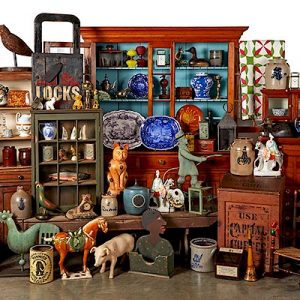 The Online Only Decorative Arts auction, presented by Pook & Pook is a series of over 800 lots with fine art, decorative art, and furniture representing Americana. The term Americana applies to objects that represent the comforting, romanticized history of America; think apple pie, baseball, and American flags flying. Although super-stylized, Americana still represents an important aspect of American culture and is often entertaining in its execution.

Among the most eye-catching lots, is a patriotic eagle quilt that features the Great Seal of the United States and four interlocking American flags. Also available is an owl decoy from the early 20th century. Decoys like this owl are used to scare away pigeons and other pests. Pook & Pook notes that this owl has minor wear to its ears. The lots with the highest estimated value include a jar created by Harrison McIntosh and a Civil War-era case of dental tools. The dental tool case was owned by Dr. Darlington Lewis, a dentist in Milford, Delaware. A handwritten note and business card included in the case indicate he started dentistry in 1859.

With starting bids ranging from $10 to $750, this auction has pieces approachable to both beginning and seasoned collectors. You can view each of these lots and register to bid on Bidsquare.